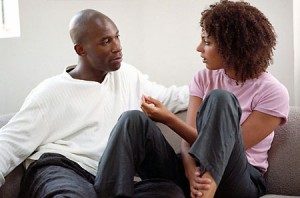 Poor communication habits are one of the most difficult relationship problems to overcome. The result is feeling lost, hopeless and misunderstood. These emotions, when felt often, have significant damage to a couple’s relationship.

Listening, understanding and empathy get thrown out the window somewhere along the way, and what you’re left with is a lot of blaming, defensiveness, lack of support and general disregard for the other person’s feelings.

And the thing is, we NEED to communicate with our significant other. It allows bills to be paid, family obligations to be met and daily lives to function well. Without it, we’re ineffective in our relationships, and in life.

There’s a proven and effective way to put the breaks on unhealthy fighting, however. It takes some practice, but by following the outlined 5-step communication strategy, you’ll be on your way to better problem solving in no time.

Step 2: The speaker’s role is to use “I” statements instead of “YOU” statements. “You’re always late,” or “You make me so angry sometimes,” sounds very much like a personal attack and puts the individual on the receiving end immediately on the defense. Instead, use this formula for getting your perspective heard:

When you don’t pick up your dirty clothes off the floor, I feel disrespected, because then I have to pick up after you and it adds more work for me.

Step 3: The listener then gets clarification if needed (asking questions is ok) and then paraphrases what he/she heard. Here’s a formula to try:

So what I heard you say was that when I don’t pick up after myself it makes you feel like I’m disrespecting you and creates more work for you too. Did I get that correct?

Step 4: The speaker then says “You nailed it!” or “No, that’s not what I said.” And attempts to use the same formula again from Step 2 until the listener is able to repeat the speaker’s position on the topic. Then, the speaker continues by saying what they need from their partner in the future. Here’s the formula:

What I need is for you to be better about picking up after yourself in the future. It would make me feel like you respect my time, just as much as you respect yours.

Step 5: The listener summarizes the NEED that was given and expresses empathy by using this formula:

So what you need from me is to be better about picking up after myself. I guess I never saw it that way before and I can understand how you’d feel disrespected by that. I’ll try harder in the future.

The roles are then reversed, and the speaker then becomes the listener and uses the same 5-step communication strategy outlined above.

This method focuses on how the person with the problem felt, and doesn’t insinuate malicious intent by their partner. It’s a calm, clear and effective way to express your feelings and identify the behavior that you would like changed for future situations.

Just like anything new, the 5-step strategy might feel strange, uncomfortable and unnatural to start. But stick with it, because it works and DOES come easier with time. You’re guaranteed a more healthy and effective way to communicate with your partner if you follow this guideline regularly.