Couples often have the same complaint. “When things are good, we’re great. But when we argue, we can never seem to fight fair. It becomes downright nasty and that just isn’t us.
Sound familiar to you? 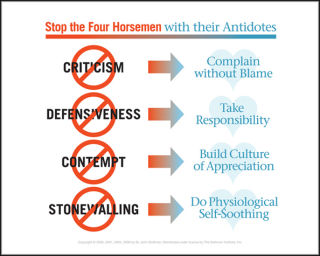 Successful and loving couples do one thing differently to couples that are struggling. They don’t just keep their manners in check when they’re getting along; they know how to be polite to one another during times of conflict as well. This is a critical difference and one that has lasting effects.
Don’t feel doomed if you’re the couple who drudges up the past, quips back in anger and lashes out in hostility. If you know what to look out for, you’ll be on your way to having healthy conflict management in no time. Marriage researcher John Gottman calls the four most destructive relationship patterns the four horseman of the apocalypse

I’m sure if you think back to your childhood you can recall one or both of your parents using the four horseman so it only makes sense that we would learn them early on and carry them with us. However, we don’t have to allow them to continue. Understanding what they are and knowing when they creep up in your relationship allows insight in being able to stop them in their tracks and offer a different to the sometimes-difficult conversations we have with our loved ones.